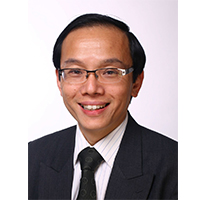 Jimmy Yeoh has been the CIO for DHL Express Asia Pacific since June 2009. He is a member of the Global IT Executive Committee, Global Project Prioritisation Review Board and Asia Pacific Management Board, and is responsible for IT across 40+ countries in the region. In his current role he is a member of a global team that is responsible for the division’s IT strategy and network, and manages IT investments for DHL Express across over 220 countries and territories.

Jimmy started his career in 1985, after obtaining a Degree in Engineering and a Master’s in IT. His first role as a Programmer Analyst gave him the opportunity to work through the ranks and gain experience on projects and databases and establish a well-rounded understanding of the full spectrum of IT. It was at this point that he started setting his sights on becoming a CIO.

After this, Jimmy worked in various IT roles in the National Computer Board and then the Singapore Trade Development Board and was involved in the implementation of Tradenet, fully automating import and export declarations on a nationwide basis. He also served as Vice Chairman for the Japan Singapore EDIFACT Board.

During his tenure in these roles, he worked on digitisation projects for government organisations in Singapore which involved understanding requirements, mapping out long-term plans for the automation of government departments as well as supporting and implementing solutions. This gave him solid experience in strategic planning but also in providing support to his office environment. Jimmy says of his early experience, “It was a good opportunity to understand the bigger picture of an organisation’s strategic objectives and how IT programs are developed and implemented. It gave me a good starting point to understand how IT can add value to an organisation.”

In his role at the Singapore Trade Development Board, he gained exposure to trade statistics, business intelligence and was appointed as Trade Development Manager charged with implementing the new National Electronic Data Interchange (EDI) system introducing changes to imports and exports. He was tasked with moving the paper based system to a full electronic system, which developed his project management skills, business process skills, stakeholder engagement and change management skills.

The differing nature of the role allowed him to learn how to build solutions to help facilitate trade. Whilst working on this project, he worked as part of a wider team and visited multiple countries around the world to see how national EDI systems were implemented elsewhere, taking best practices from Taiwan, Hong Kong, the US and Belgium. In this role he became involved with air cargo agents, customs agents and built up his knowledge of the trade industry which led him to his next role at DHL.

Jimmy joined DHL in 1992, where he worked as Country IT Manager for DHL Singapore before taking on a regional Asia Pacific role from 2000 to 2002. This then led him into an international role where he became the Regional CIO for Emerging Markets (Eastern Europe, Middle East & Africa) and was based in the UK for two years and in the Czech Republic for five years. In this role, he established the telecommunications and IT infrastructure for DHL across 100 countries, consolidating and rationalising customer service, finance and operational services into two global data centres and implementing standardised global services across the emerging markets region.

Throughout the years, Jimmy has built a tremendous amount of experience both locally and internationally. “International experience has helped me to develop as an individual. DHL operates in every country in the world, so it is important to be able to understand different cultures and recognise different practices in other countries. With 100,000 staff at DHL, it’s important for me to understand the different cultures of our teams and to be able to establish effective IT practices around the world.”

Jimmy manages 30 direct reports as well as 500 indirect reports based in multiple countries around the world. He says it can be a challenge managing such a diverse and large virtual team, across time zones, and he has to be flexible to have early morning or late evening calls. “It’s challenging to find work-life balance and the time to recharge. I like to plan vacations to enjoy my time off and schedule time for my family. You need to make sure that you’re not working all of the time.”

With the demanding nature of the CIO role and the vast responsibilities that come with it, the technical know-how and skills become less important. “Earlier on in your IT career, technical skills are critical to your success, but as you become more senior, the soft skills become even more important. The role of the CIO is less about the technical aspects, but more about being able to engage, leverage and manage people,” he says. At the same time, he says it’s important to understand the core processes within your organisation. “At DHL it is key for me in my role as the CIO to partner with Operations, however, due to the nature of the industry, it’s also important to work cross-functionally with customer service, and from a customer standpoint, provide a full suite of services.”

Jimmy says that the skills acquired help him to address the multiple challenges a CIO faces on a day to day basis. He says, “One of the big challenges is being able to look ahead and think tactically to be able to drive change based on medium to long-term plans for the organisation.”

Jimmy says an aspiring CIO should not shy away from these challenges but see them more as opportunities. He therefore believes it’s important for aspiring CIOs to gain wide exposure early on in their career. “Embrace the opportunity to obtain a good appreciation of the breadth of activity within IT, but at the same time you must develop stakeholder engagement and communication skills, and be able to network across the organisation to build up your profile. At the end of the day, it’s about how you can add value to the organisation. The IT landscape is continually changing, so you must keep abreast of the changes to become an enabler and driver of change.”