DNA OF A CFO

DNA OF A CFO
THE MAKINGS OF A FINANCE LEADER 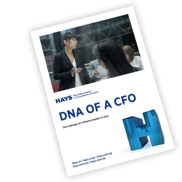 We spoke to 145 CFOs across Asia about their background, experience, business, career and interests to uncover the DNA of a CFO. From qualifications and experience to personal development and work-life balance, our report gives you an insight into what it takes to reach the top finance job.

If you are considering your career options and want to become a CFO, our report will give you an insight into what it takes. And if you are already a CFO, or well on your way to becoming one, we hope you find what your peer group have to say about success to be interesting and engaging.

48% of CFOs have worked outside Asia at some point during their career; mostly in North America (53%), followed by Australasia (26%), Europe (21%) and the UK (19%). The large majority (99%) say that the experience has benefited their career advancement.

Encouragingly, 86% say that if they had their time all over again, they would still choose the profession, and most would either like to take on a higher finance leadership or CEO role in the future. 55% have recently partnered with key departments outside of finance, while 49% attend networking events. Almost all (81%) are on LinkedIn yet less than a quarter use social media to network, and 15% don’t network with other CFOs at all.

Over half (58%) of respondents rated strategic planning as an important skill for a CFO to possess. People management took second place (52%), while commercial acumen ranked third with 42% of the vote. 20% believe that the sales function is the most important discipline to partner with, followed by operations (16%) and marketing/communications (6%). Having a proactive nature was seen to be a key component in career success for 61% of the CFOs surveyed.

The main tip for the next generation was to be commercially aware, develop their people skills and get involved with operations rather than just the numbers. Outside of work CFOs are generally active, as 70% of those surveyed choose to play sport or exercise in their spare time. 68% like to socialise with friends and family and 38% like to travel. When asked for their source of business inspiration, respondents to our survey frequently cited well known business entrepreneurs such as Lee Kuan Yew, Jack Ma, Jack Welch, Masayoshi Son and Steve Jobs.

Interested in a career in finance or looking for your next finance role. Allow Hays to help

DNA of a CFO promo block

Check out our infographic featuring key stats from the DNA of a Finance Director report.

The DNA of a CFO – do you have what it takes?

For your copy of DNA of a CFO please contact your local consultant or email Marketing@hays.com.sg