DESPITE WAGE STAGNATION, MOST SINGAPOREAN PROFESSIONALS REMAIN SATISFIED WITH THEIR SALARIES 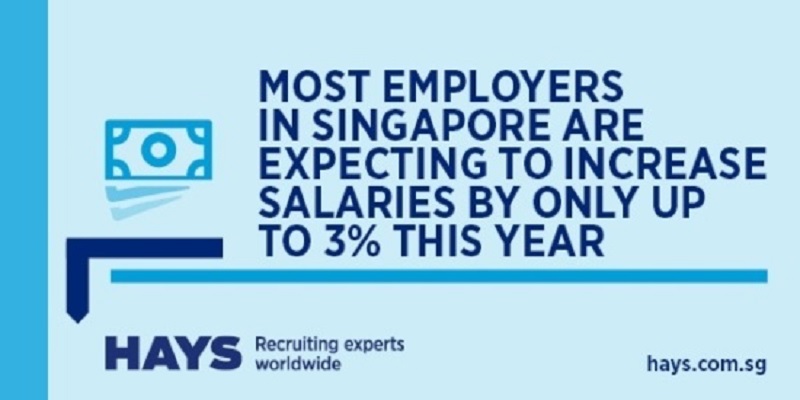 Despite looming wage stagnation, employees in Singapore remain among the most satisfied with their current compensation packages in the region, finds the latest Asia Salary Guide report by leading recruitment experts Hays. However, pay and benefits remain a high priority for those seeking new jobs, but are of lower importance when it comes to staying with their current employer.

Wage increments may be reaching a stagnation in Singapore, with most organisations (42 per cent) expecting to give out raises of only up to 3 per cent this year – the highest percentage to offer this low bracket in Asia after Japan (54 per cent). This was followed by over a quarter (29 per cent) who expected raises between 3-6%, and a significant number of others (19 per cent) that expected to give out no raises at all. The latter were the highest percentage to offer no increments at all after Malaysia (20 per cent).

However, working professionals in Singapore appear to be realistic in their expectations and match employer predictions, with the majority (26 per cent) also equally expecting increases of up to 3 per cent or between 3-6% (26 per cent).

Additionally, working professionals in Singapore reported being most satisfied with their current compensation packages (56 per cent) after Hong Kong (61 per cent). Singapore also ranked highest in Asia for the greatest number of employers who offered benefits in addition to salary/bonus (85 per cent).

The guide found that while only 36 per cent of employees in Singapore were actively looking for a new job, 45 percent were still open to new opportunities. The latter may well translate to ‘better compensation’, with 60 per cent of employees in Singapore favouring ‘salary or benefit package’ as the top reason why they are looking for new employers. However, when it comes to retention, 48 per cent of employees favoured work life balance as the top reason why they would stay with their current employer, while 38 per cent favoured management style and company culture – both were the highest percentages in Asia to say so. Only 37 per cent cited salary and benefit packages as their reason to stay, the lowest percentage in Asia to say so.

These results highlight that while high compensation is integral in attracting talent, it appears to be less important when retaining them. With such clear opinions from professionals, organisations could take heed and tailor both their attraction and retention programs for 2020 accordingly.

Grant Torrens, Regional Director at Hays Singapore commented, “Continuing economic complexities have caused many businesses in the region to adopt a more conservative outlook to both hiring and compensation. But as the results show, employees in Singapore are well aware of this and carry realistic expectations for the year ahead. Compensation is not the top priority for staff when it comes to retention, meaning that businesses facing particularly challenging times would do well to focus on promoting work-life balance and improving their management style or work culture to retain their best staff.”

Download your copy of the 2020 Hays Asia Salary Guide